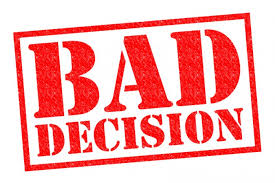 Have you ever made a bad decision? If we’re honest, we’d all have to admit we have. No one likes making bad decisions, but they’re a fact of life.  Maybe you hired the wrong person, chose the wrong vendor, or launched a new program that no one seems to want.

Your value as a manager is not measured only by the quality of your decisions.  You will also be judged by how you handle bad decisions when you make them.  So, what do you do when you realize you made a mistake?

Here are 4 actions to take when you realize you made a bad decision.

The Seven Laws of Learning

5 Behaviors of a Cohesive Team